Scotstoun House was designed in 1962 by Peter Foggo of Arup Associates. Set in the remains of a walled garden, to was conceived in the architectural tradition of a ‘pavilion in the park’. As an elegant exercise in concrete, steel and glass it was also an exposition of Arup’s design philosophy of the time.

50 years later, however, it had started dos how the limitations of the 1960’s technology as we as become a constraint on Arup’s preferred way of working.

Over and above this, the project became an exercise for both Arup and haa design in “holistic sustainability”, in demonstrating how an existing building (in case of Scotstoun House one that fell radically short of current building standards) might be upgraded to meet the highest standards of sustainability at the same time as supporting the latest ideas on flexible working. 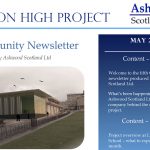